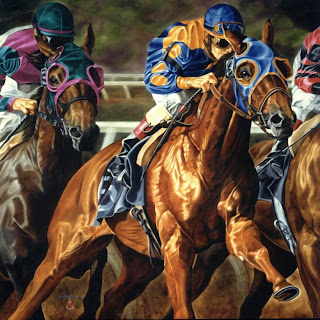 Deborah Dolen's Preakness Predictions 2011
The 136th Preakness on May 21,2011 is drawing a little comedy on Twitter. Twitter people want to see "Rapture" and "LeftBehind" in the running. I was thinking "ThereIsNoHeaven" should run in that litte trifecta-owner, naturally, Stephen Hawking, to make a shocker of an ending promised by major know nothing (no not Hawking) but the real master of doom Harold Camping. My take on that expiration date is more a Lucifer date-he knows his time is almost up-not to mention the small detail that Harold Camping signed business contracts that begin after May 21, 2011 .

Back to the real world, betting on the Preakness is always a lot easier than the Kentucky Derby because there are far less horses and those horses who performed well at the Derby usually perform better at the Preakness. The caveat to all of this is horses do not usually win on dirt and go back to win on synthetics. I know I said in my last article, Animal Kingdom had no dirt experience at all and I ruled him out, albiet his Jockey I ruled in. Animal Kingdom won the Derby anyway and I learned an exception to every rule. Animal Kingdom was my belated pick at the Derby because of the Jockey. That Jockey, John Velazquez, was supposed to ride Uncle Mo – who became ill with suspected gastric issues as the Derby approached.

Uncle Mo is still recovering at Winstar Farm where he has been since May 9th. Uncle Mo is doing better and has gained 30 pounds. He had lost at least 60 pounds during his perplexing illness. Speaking of rest, Nehro has been pleasantly excused from the Preakness. His owner, Ahmed Zayat did not feel compelled to enter Nehro in the Preakness and loves his horse enough to give him a break. For that reason alone, Nehro’s owner just won five Preaknesses in my book. This leads to my other point about Animal Kingdom, I think beyond going back to a synthetic track, and the fact he is probably tired – I am betting on him for show. That is third place. He has been run a lot the last year.

Midnight Interlude [7] had a jockey change since the Derby, to Martin Garcia and there is no doubt Garcia knows how to bring Interlude to his best racing potential. My best guesses Derby wise were the Jockey guesses. Since I am talking Jockeys, I need to mention Julien Leproux and “Dialed In” [12.]

Based on all of that, my picks are Mucho Macho Man [9], Dialed In [12], Animal Kingdom [11], and Midnight Interlude [7]. I will just probably trifecta box those four.
To see the Preakness line up click here.