World in Motion: No Time for Rugged Individualists (Dolen Syndicated/RSS/API) 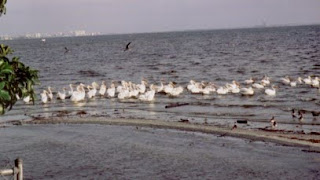 Photo by Dolen Images (Dolen Syndicated/RSS/ API)
We had a storm on Sarasota Bay for the first time in months. It was an odd comfort to see lightening hit the open bay like hitting a Teflon pan and illuminating the sky just before noon. It was also somewhat redeeming to hear last night BP may have been able to successfully attach a siphon to the rouge oil geyser. Even if BP did assuage the oil flow there is still a lot of work to be done for the fish and wildlife along many coast lines.

The entire incident underscores our complete fragile existence. No one would have thought a situation hundreds of miles away could have global economic impacts as well as marked physical destruction and mayhem down the gulf coast states and even up to the Eastern seaboard. If the oil were to make it to the gulf stream a good amount, about 1/4 would have been carried to the UK and the other 1/4 up the east coast of the United Stated. As far as other long distance catastrophes’ with far reaching local impacts, it was only year 2007 Georgia wild fires, several hundred miles away darkened SW Florida like a fog for days. I woke up early one May morning sure my neighbors were using their fireplaces. The smell of the smoke from so far away permeated the breeze.

And we are not even days away from Eyjafjallajökull, I have dubbed the Canadian “Ey” which is still not a happy volcano. Volcanic ash disrupting thousands of flight (and rugged individualist,) are still being disrupted. The fact the UK, Ireland and other select counties are still reveling from the volcanic ash is of most interest. The volcano eruption is another magnificent situation over there. And we have not seen anything yet. Katla, a bigger volcano near “Ey” has never been known to stay quiet if Ey is unhappy.

I feel the probably is great that if we ever suffer a world wide shut down, it will not be North Korea and Little Kim, or even Iran and Ahmadinejad. It will most likely be a volcanic disruption that can cover the globe in volcanic dust for years. Because of that and the ever present Hurricane threat to FL, I am storing food, with an emphasis on Vitamin C. A sunless period of years would make that vitamin a necessity. I have been through Bonnie, Frances, Charlie, and Wilma in FL and even Ike over in Houston where I was staying at the time. I have seen what a few weeks without electric can do.

My short term food supply [1 month] is all prepared meals and snacks because no one really wants to cook anyway when there is no air conditioning. Sam’s Club has a lot of neat selections for bulk items. Canned meats, fruits, snacks, nuts and even candy. Candy is simply interesting when there is nothing else to do! For long term food storage I pay attention to combinations we would really eat and expiration dates. True anything “Hormel” could last a decade of Armageddon. During our first experience without electric, we leaned we could get sick of Sweet Sue’s chicken and dumpling after ten days of having only that. Water purification systems are also really important. Although loss of electric is the main result of any event, bad water is usually the second. I keep the Brita brand jugs to purify and Clorox (8 drops a gallon) to disinfect if the water situation is really that bad and there is no electric. The Brita would also serve to take the Chlorine taste out. If money is tight just get charcoal sticks and charcoal in general. Japan uses them as water stirrers because they presently have a myriad of problems over there with their water supply.

It never hurts to be prepared and rotate your long term supplies. At worst someone else can potentially use them if crises does not strike you but close to home.

Deborah Dolen is an author who lives on the Gulf of Mexico near Long Boat Key. Deborah is shown in the photo with her Dog Ringo by her side over looking the Gulf of Mexico. Ringo was rescued from Katrina, and sent to Plantation,

Florida where Wilma hit before Deborah Dolen could go get him. She flew a private plane to get Ringo and drop off supplies for 10 vet rescue centers. Together Deborah and Ringo got through hurricane IKE where they were staying near Galveston Bay in September of 2008. The two got to see the devastation of IKE first hand, as well as Hurricane Charlie when Deborah was staying on that side of the gulf. Deborah Dolen has been through Bonnie, Frances, Charlie, Ike, TS Gabrielle, and Ringo has been through Katrina, Wilma and Ike. They know what weeks without electric and other necessities is all about. You can join Deborah Dolen at MySpace http://www.myspace.com/deborah_dolen or see her RSS Feeds on Twitter http://twitter.com/DeborahDolen or check out her new site dedicated to oil and water environmental issues http://www.deborahdolen.org
Read about Ringo a dog flown in from Katrina. Official Bio of his owner and short Bio. RSS Syndicated Feeds on the environment. How Twitter is best used. Deborah Dolen Books on Amazon. Review of her books on Open Library, Paperback Swap, Good Reads and ReviewScout. You can also read Google Profile. Deborah Dolen on MySpace Facebook, and Flickr. This is our favorite blogspot. See Deborah Dolen on YouTube and her last book written London Apothecary and book.
at 3:11 PM