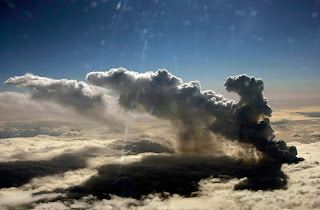 “the perfect storm” which takes out NYC, or my personal favorite, Washington, D.C. and its lobbyists,’ one good volcanic eruption would be the most probable mega natural disaster to put a wrench in the world’s engine and this has happened a few times in our rather short history.

No other natural disaster can compare and be more globally disabling than a major volcanic eruption and one that can cover the atmospheric globe in ash, catapulting us into an ice age. This would be history simply repeating itself as the “Mini Ice” age was primarily attributed to a heavy layer of volcanic ash that suspended itself into the atmosphere for years blocking sunlight. Almost overnight farmer’s could no longer get enough sun light to grow crops in . Also emitted by eruptions is sulfur in the form of SO2 gas. When this gas reaches the stratosphere, it turns into sulfuric acid particles, which reflect the sun's rays, further reducing the amount of radiation reaching Earth's surface. It can take years to cycle out of the atmosphere.

So, where is ? is located between the waterways of Greenland and . is built on a volcanic rock on the 's mid-oceanic ridge and it has grown used to eruptions. is known to be on top of the hottest magna part of the earth. 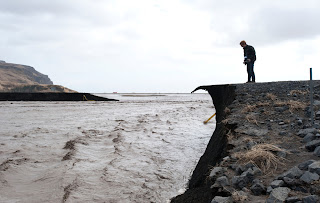 As we see in , the fall out reaches as high as 747’s, 36,000 feet, which is the issue at hand right now in . Most over seas flight patterns were centralized on Howard Hughes Pan Am model refilling in or . The situation truly can affect changes to where we refuel. We are so young in our history, when those transatlantic flight plans were drafted, we have never seen what a good volcanic out burst can do. But Ben Franklin did see it.

It was only a few hundred years ago, in 1815, the eruption of Tambora in Indonesia blanketed the atmosphere with ash; and reported snow in June and July of that year. Looking back at history we were lucky it eventually cleared out as some events have been known to cover the globe for years. In reference to the Laki volcano eruption in Iceland, Benjamin Franklin during a lecture in 1784 made the following comments ‘….when the effect of the sun’s rays to heat the earth in these northern regions should have been greater, there existed a constant fog over all Europe, and a great part of North America…’

Naturally most aircraft are the first to be affected and prohibited to fly in volcanic fall out, but the ramifications can be fast, concise and awful to life as we know it. Europe, for example, reports only having enough resources to feed people for a month and the same is very true for the . If we have a situation like this in the states, we are only nationally prepared for maybe a month of food production only to graduate to empty shelves.

The situation is still not over in . They are playing a game of wait and see of the bigger volcano at will be triggered to erupt. In 934 A.D., erupted and produced the largest lava flow ever in the known history of the world. Again, affecting the weather, crops and live stock for years.

I grew up with a two year supply of food storage and rotation as being a really paramount practice. I slacked off on that until I went through a few major hurricanes and understood the intrinsic value of supplies-if not for you, for your neighbors. If I considered to slack off again I would read up on what one volcano can do. Creating a supply is not hard and can be in the form of just buying extra food each week, [that you could actually prepare and would want to eat] and storing it. Even $10 a week aside in long term storage foods can add up nicely in a time of need. I use Sam’s Club for that because I buy restaurant sized cans at a good price.

I will be adding more citrus and vitamin C products to my food storage. Lack of sunlight lends itself to among many things, a lack of any products containing vitamin C which then leads to scurvy. I am convinced if we have a global crises it will be the result of a volcano eruption and not anything else.