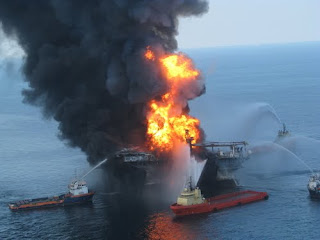 Whatever we learned from the Exxon oil spill will come in very handy as the colossal body of floating oil from the downed BP rig creeps towards the Louisiana, Alabama and Florida coast lines. By May 5th, 2010 the oil spill will be the size of Rhode Island. The oil spill is so large now that NASA can access satellite images of the oil spill from space. The latest currents are pushing the Gulf oil spill northward, toward a chain of barrier islands off Louisiana. Any change in currents over the next three days will be detrimental to Florida’s coast lines. At the moment the oil spill covers 450 square miles and growing. 42,000 gallons a day of oil have been gushing into the Gulf of Mexico since April 20th, 2010. Floridians’, already exasperated from arguing they do not need oil drilling off Florida’s coast, are now busy contemplating options for what seems to be an imminent threat to the coast line and its precious wild life. 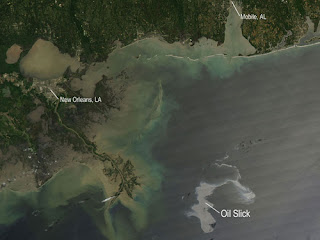 Florida has already lost 400 manatees, (8% of the Manatee population) 200 sea turtles and millions of fish in the record breaking 2010 Florida freeze when gulf waters dropped below 55 degrees for prolonged periods. Not that anyone cares, but that same freeze cut SW Florida’s infamous python problem in half also, which is an estimate by Fish and Wildlife staff. [No one has gone out to the marshes to ask how they are doing, so it is just an estimate.]

Regarding the April 20th, 2010 BP rig explosion, Doug Suttles, the chief operating officer for exploration and production at BP, defended the company’s efforts, and said the cleanup was costing $6 million a day. He said engineers had not given up on engaging the valve and were exploring other possible fixes.

Why a certain emergency value that was supposed to work in situations like this, failed to work, will most likely be the subject of congressional queries for later. On other fronts the Coast Guard is trying to set the floating oil ablaze and hopefully reduce the threat. The oceanic agency issued a guide to the burn that advised as follows:

“Based on our limited experience, birds and mammals are more capable of handling the risk of a local fire and temporary smoke plume than of handling the risk posed by a spreading oil slick. Birds flying in the plume can become disoriented, and could suffer toxic effects. This risk, however, is minimal when compared to oil coating and ingestion.”

A burn does not get rid of the oil entirely. It leaves waxy residue that can either be skimmed from the surface or sink to the bottom of the ocean. As hurricane season approaches, Floridians may be praying the “opposite” prayer they normally pray: That a major storm comes in the gulf and blows the oil residue issue out.

As far as stopping the actual oil leak, skeptics are saying containment is almost impossible, and trying to assuage the oil leak will go on for some time. The same skeptics fear the oil will reach a certain main current known as “the loop” that will cause major damage to the entire Florida coast line all the way down to Key West. “At the present time, the loop current isn’t reaching quite as for north as where this spill occurred, but it often does,” one expert said and added “if oil gets into the loop current, it can very rapidly get into the Florida Keys and the southeast coast of Florida.” http://www.deborahdolen.net/about-author-Deborah-Dolen.htm

Deborah Dolen is an environmental writer who lives in SW Florida. Deborah is also Editor in Chief for Mabel White DIY. Join her on Twitter @deborahdolen @mabelwhitediy or at FaceBook http://www.facebook.com/deborah.dolen