Now What? Oil Spill in the Gulf of Mexico Observations by Deborah Dolen

Now What? Oil Spill in the Gulf of Mexico Observations by Deborah Dolen (AFP/Getty Images)

Get ready to see emancipated dolphins, gasping sea turtles and whales that cannot take it. BP's well is spewing about 210,000 gallons of oil a day into the ocean, according to Coast Guard estimates. This is much more than the 45,000 gallons a day people were told a few days ago. This spill will rival the Exxon Valdez and be more spread out because the sweet crude oil is not entering cold waters where it tends to gunk together, warm, it breaks apart easier and some oil will fall to the ocean floor. Falling to the bottom is not a good thing as many marine life eat off the bottom. Warmer water temperatures offered by the Gulf of Mexico is the same reason this oil spill is not easy to set afire as 95% of the spill is already mixed with the water. The comparatively warm waters of the gulf also move the oil spill faster than in the Valdez crises. But the best comparison, discussed at the end of this article in not Valdez. The best comparison to an oil spill of this likeness an origin is one that happened last year in September off the coast of Australia in the Timor Sea.

The Gulf of Mexico oil spill is presently headed to the Mississippi river. What impact it will have on fresh water supplies will be an urgent question. The areas trillion dollar fishing industry is already past the risk stage, and lawsuits are being rushed to the court houses by fisherman already damaged – primarily shrimp fishermen. The other coastal states need not worry, there is enough sweet crude oil spewing to go around for everybody. As soon as the current goes south east, and it will, a major undertaking to protect Alabama and Florida wildlife and coast lines will be underway. 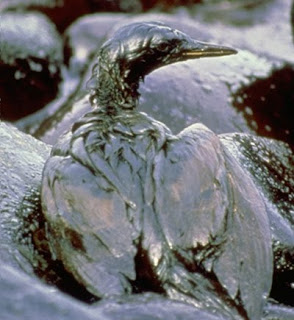 Greenpeace's Hocevar said he's particularly concerned about the impact to critically endangered bluefin tuna. "It's their spawning season and bluefin larvae in this part of their life-cycle would be near the surface of water," Hocevar said. The oil could also harm sea turtles, which are approaching nesting season; fin whales; menhaden, a fish species harvested mostly for fish meal and fish oil; bottom-feeding oysters; and numerous species of birds, according to Hocevar.
Florida environmentalist report endangered sea turtles are in the gulf preparing any day to begin the difficult process of nesting on Florida’s beaches. Manatees’, the vegan loving walrus looking creatures are not going to fare well either in floating gas. There is no data on the effect of an oil spill on Manatees because they have never been out playing in an oil slick. Dolphins are expected to also experience crises due to the oil spill, such as emancipation, a hallmark of the Australian oil spill last year.
Read about Ringo a dog flown in from Katrina. Official Bio of his owner and short Bio. RSS Syndicated Feeds on the environment. How Twitter is best used. Deborah Dolen Books on Amazon. Review of her books on Open Library, Paperback Swap, Good Reads and ReviewScout. You can also read Google Profile. Deborah Dolen on MySpace Facebook, and Flickr. This is our favorite blogspot. See Deborah Dolen on YouTube and her last book written London Apothecary and book.
at 3:16 PM